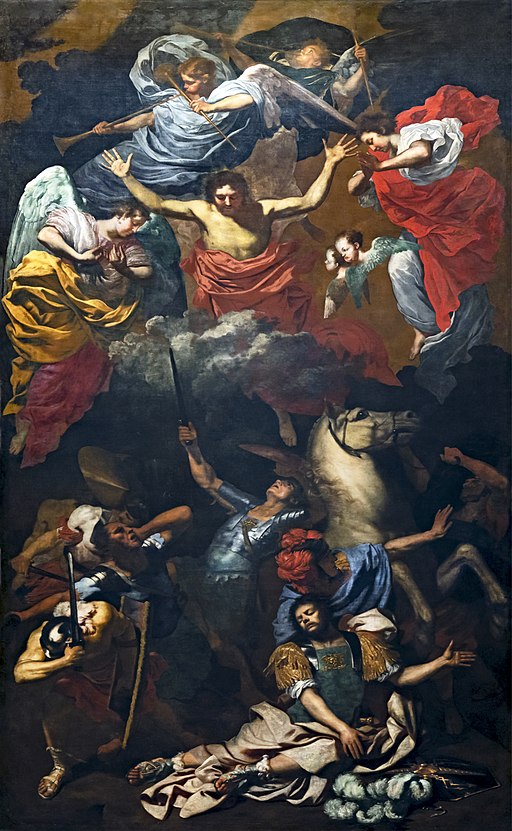 The most dramatic conversion in salvation history turned a murderer into a saint.  The conversion of St. Paul shows Divine intervention came with a blast of light and words reverberating from heaven to change the course of history.

The story of St. Paul is one of the greatest stories of fear versus hope and damnation versus redemption.

His satisfaction of the stoning death of St. Stephen, our first Christian martyr, ripples through the centuries to our present day shouting the words of Scripture: “even if your sins be as scarlet, they shall be as white as snow.” (Isaiah 1:18)

The Dramatic Conversion of St. Paul

Paul’s conversion captivates us.  It gives the strongest evidence of Christianity and of Christ. It took one word from Christ to bring Paul out of darkness. Christ brings Paul to his knees, blinding him, and changing the direction of his life. Paul’s entire perspective changes from violent hatred to charitable zeal. Those Paul seeks to destroy now become his greatest advocates and friends. They become his apostolate of love with his only goal to save them now for Christ. Paul became a new creature with a new heart and right spirit in him. ( Psalm 51: 10-12.)

A painting in a Tolmezzo, Italy church provides the instant the flash of light penetrates St. Paul’s conscience. 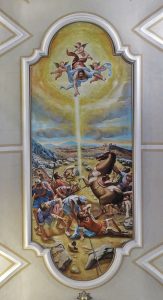 An ancient sermon by St. Fulgentius of Ruspe illustrates how Christ’s love can heal anything.

Stephen gains heaven, but Paul follows, helped by the prayers of the very man he helped to kill,  said St. Fulgentius.

“This surely, is the true life, my brothers, a life in which Paul feels no shame because of Stephen’s death, and Stephen delights in Paul’s companionship, for love fills them both with joy. It was Stephen’s love that prevailed over the cruelty of the mob, and it was Paul’s love that covered the multitude of his sins; it was love that won for both of them the kingdom of heaven,” St. Fulgentius wrote.

The old Paul applauds the men for the stoning of St. Stephen who “laid down their garments at the feet of a young man, whose name was Saul.” (Acts 9:57) “And Saul was consenting to his death,” became “all things to all people so that I might by all means save some. I do it for the sake of the gospel, so that I may share in its blessing. “ (1 Corinthian 9:23)

Paul who “made havock of the church, entering from house to house, and dragging away men and women, committing them to prison.” (Acts 9:3) changes course so suddenly that he only seeks the good of those he once persecuted.

“Let love be genuine, hate what is evil, hold fast to what is good; love one another with brotherly affection in showing honor… contribute to the needs of the saints, practice  hospitality,” he wrote in Romans 12: 9-13.

Who was St. Paul?

St. Paul’s dramatic conversion story is a prime example of God’s mercy and intervention. It is still calling people to the Gospel in art and even a  major motion picture starring Jim Caviezel brings the historic accounts to modern minds.

Saul was born a Jew of the tribe of Benjamin with Hebrew parents and was a Pharisee the book of Philippians tells us. His father was a Roman citizen, explaining why Saul uses his Latin name, Paul, to evangelize the Gentiles.

Paul’s namesake (King Saul) was the first King of Israel from the Benjaminite tribe.

The famous passages of Saul hunting King David, who was innocent, reminds us of Paul’s persecution of innocent Christians.  David becomes the new King – after the heart of God and a Messianic figure.  Christ comes from David’s line as does Christ’s mother, the Blessed Virgin Mary.

Paul’s connection to the tribe of Benjamin is one more part of the story. Out of the 12 tribes of Israel it was given a special blessing by Moses (Deuteronomy 33)

At the death of Solomon, the 10 tribes separated from Roboam; but the tribe of Benjamin, with that of Judah, remained faithful (3Kings 12). These two formed the Kingdom of Judah, and they became, after the Babylonian captivity, a reestablished nation (1 Ezra 4:10)

“Blind, lame, deaf, poor, or dead. This is us,” said Father Jerry Byrd in a December 2022 homily. “Jesus comes and meets us where we are and if we let Him, opens our eyes, bids us walk, makes us hear, gives us hope, and raises us to new life – He won’t leave us where we are. This is our reason for joy. Gaudete in Domino.”

God wasn’t going to leave Paul the way Paul was. He was going to use everything Paul had done for the greater Glory of God.  God gave him the greatest mission in Christian history to spread the Gospel. It cost Paul shipwreck, imprisonment, and even death.

St. Paul’s conversion  was so astounding that the greatest artists of the world wanted to paint it.

Caravaggio’s depicts the moment that Christ enters into Paul’s life. Christ was a force more powerful than Paul’s vengeance. 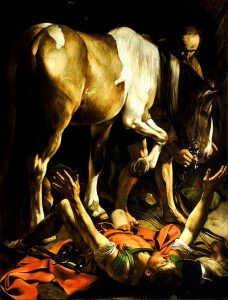 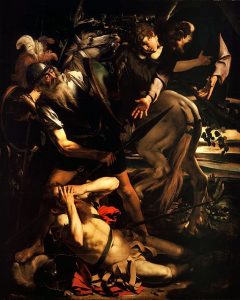 His life story is so important to Christianity that the Catholic Church’s liturgical calendar honors Paul’s life throughout the year. His feast day is June 29 when he is honored with Saint Peter. On January 25 we honor his conversion, on February 16, his shipwreck, and on Nov. 18 we celebrate the dedication of his Basilica in Rome. The conversion of St. Paul who was intent on wiping out the Christian race turns out to be something very unexpected.

Find even more depictions of St. Paul’s conversion in art.