St. Michael the Archangel// He Fights for You 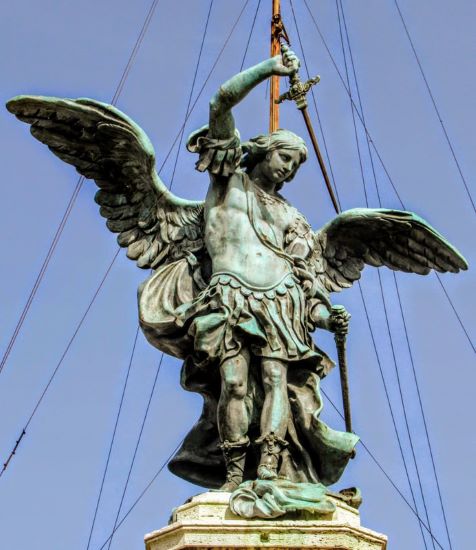 St. Michael the archangel is unstoppable. His appearance throughout history and the battles he fought and won for the salvation of souls inspires wonder and awe.

No one is sure what he looks like – being pure angelic spirit– but St. Michael the Archangel’s likeness seems to be known by all.

Sacred Scripture documents his existence, mentioning him in the Bible books of Daniel,  the Epistle of St. Jude, and Revelation. The Catholic Church has also approved numerous apparitions of St. Michael to the pope’s and the lay faithful throughout the centuries.

When he appears there is no mistaking who this archangel is and why his name means, “who is like God.”

The 4 Ways St. Michael Defends Us

The Catholic Church defines four major ways St. Michael defends the Church and the People of God.  It is clear that this archangel is appointed by God to help us due to St. Michael’s mention in Holy Scripture and the numerous apparitions that reminds us of God’s care of us through the intercession of St. Michael.

The four main ways are:

How we got the St. Michael Prayer

While there are many prayers to St. Michael –litanies, consecrations, a chaplet, and more—the best known prayer comes from a vision of Pope Leo  XII.

We don’t really know all of what Pope Leo saw, but he did have a vision that was not pleasant and caused him to compose the Prayer to St. Michael in haste.

The pope also requested its use at the end of Mass. Pope Leo XIII firmly believed that the prayer was needed to dispel the darkness hanging over the world. Since 1886, the St. Michael prayer has been a constant companion in the prayer life of Catholics.

Saint Michael the Archangel, defend us in battle, be our protection against the wickedness and snares of the devil; may God rebuke him, we humbly pray; and do thou, O Prince of the heavenly host, by the power of God, cast into hell Satan and all the evil spirits who prowl through the world seeking the ruin of souls. Amen.