A Mighty Presence: CCJC students receive the Sacrament of Confirmation

It was a very special night for students and family from the Catholic Community of Jennings County. Archbishop Charles Thompson confirmed the students at SS. Peter and Paul Cathedral in Indianapolis on Sept. 21.

Archbishop Thompson said the Holy Spirit is essential and represents the “the perfect communion of love,” with the Holy Trinity.
“We are blessed here tonight,” he said. “We are blessed by God’s grace and we should never take these blessings for granted,” he said. 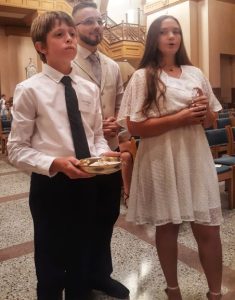 Ethan Speer and Emily Ebbing of CCJC along with Pastoral Associate Josh McNulty get ready to take up the gifts at SS. Peter and Paul Cathedral in Indianapolis. The confirmation Mass was held Sept. 21.

Archbishop Thompson taught on one of the night’s readings from Joel 2 that speaks about the coming of the Holy Spirit. He urged people to never get overwhelmed or stuck in any one moment in their lives that may have caused them pain or struggle.
“We need the Holy Spirit to see beyond that moment in our lives… otherwise we despair,” because like the passage in Joel we need to dream and envision and believe that the Holy Spirit is a “transforming spirit in our lives,” he said.
The apostles were cowardly men who became transformed when they received the Holy Spirit, he continued.
“They were transformed into bold witnesses of the faith,” Archbishop Thompson said. “They were ready to sacrifice and lay down their lives. That same spirit that was at Pentecost we call down on these students tonight!”

Father Jerry Byrd processes in with Archbishop Charles Thompson during the Mass held for confirmation students from CCJC. 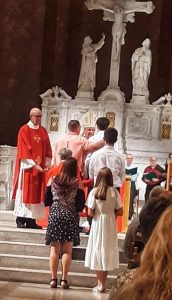